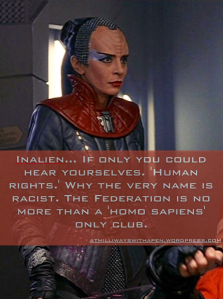 One thing that becomes clearer and clearer to me as time passes is that my parents are huge nerds and raised me to watch a lot of very nerdy things, including all the original Star Trek movies. I have seen Star Trek The Motion Picture more times than it deserves because it is, simply put, not good. (My favorite was The Journey Home — neither the best nor the worst, but I liked the whales.)

This is only relevant because bits of these movies sometimes filter back into my everyday life. The quote pictured here is from The Undiscovered Country, when the  Ahem, I mean the United Federation of Planets and the Klingon Empire try to get together and negotiate an end to the … Sorry, the whatever the heck it was they called it while the no-mans-space Neutral Zone was still a thing. During an awkward as fuck diplomatic dinner where the crew of the Enterprise visibly judges the Klingon delegates for not knowing how silverware works, there’s one point where Chekov hesitantly attempts to extend an olive branch and the daughter of the Klingon ambassador calls bullshit.

CHEKOV: We do believe all planets have a sovereign claim to inalienable human rights.

AZETBUR: Inalien… If only you could hear yourselves? ‘Human rights.’ Why the very name is racist. The Federation is no more than a ‘homo sapiens’ only club.

The reason I’m writing about this… let’s call it human-normative prejudice is because I’ve caught that human-normativity in other works of sci-fi and even fantasy.

In The Sword of Shannara, when Flick Ohmsford is sneaking around in an enemy camp of gnomes and trolls, at one point I recall a line that went something like, “It was so quiet, without the sound of any human voice.” Well of course there aren’t. Why would there be? He and Allanon the only human for miles!

That book was written in 1978. The Undiscovered Country was released in 1991. I guess in the gap between those, both the sci-fi and fantasy camps began to think a little harder about anthropomorphization — defined by Wikipedia as “attribution of human traits, emotions, and intentions to non-human entities and is considered to be an innate tendency of human psychology.” Because, yeah, we all do it. But as authors and creators, we should be thinking beyond those knee-jerk attributions. At the very least, we need to acknowledge that words and phrases like “humanity” and “human rights,” in a story where other sentient beings are known to exist, is the interspecies version of white-washing.

Then again, what does humanity even mean? An anthropologist might argue that “human” is not the same as Homo sapiens. They might be right, technically, but in layman terms I don’t think that applies. “Humanity” and “what it means to be human” very much bear our stamp of ownership because “human” is what we call ourselves.

What do you think? What examples of human-normativity have you seen?